Learn the Answers to the Universe’s Biggest Questions!

Science and religion have two seemingly opposing views of the universe’s biggest questions.Questions such as the development of the universe, evolution of human history and prophecies that surround the End of Days.

But what if the real story told you they were both right?

Discover answers to some of the biggest questions in science and religion today, including: How do world history, Genesis, and the End of Days fit within the context of God’s Plan in heaven?

Do Genesis and the evolution of human history reveal the events and timing for the End of Days?

Are there texts predating modern science that describe the Big Bang and contain the scientifically calculated age of the universe?

And finally, is there a secret harmony resolving the creation-versus-evolution debate?

The Biblical Clock is a fascinating and entertaining read, digging deep into the universe and solving its well-kept mysteries.

The Biblical Clock: The Untold Secrets Linking the Universe and Humanity with God’s Plan

Is it possible to harmonize the scientific timeline for the development of the universe with the biblical timeline described in Genesis 1? How do the evolution of human history and prophecies surrounding the End of Days fit in?

Physics engineer and CEO Daniel Friedmann loves solving problems. When the avid scientist dives deep into scripture, he’s faced with questions he feels compelled to find an answer. His quest for answers takes him and his nephew Seb on an incredible journey through the ages, discovering the lives and works of mystics, prophets, sages, philosophers, scientists and biblical commentators. Daniel Friedmann is a student of the origin of the universe and life on earth both from the scientific and biblical perspectives. His work on reconciling the biblical account with scientific observation utilizing his biblical clock formula has been reported in various newspapers, magazines and radio talk shows.

He is presently Chairman of the Board of Carbon Engineering. A company dedicated to removing CO2 from the air to reduce climate change. For 20 years, until 2016, he was CEO of a global communications and information company which built the space station robotic arms, is involved in space exploration and the Hubble telescope. He is a professional engineer and holds a master’s degree in engineering physics. He has 30 years’ experience in the space industry.

The Biblical Clock Is available for purchase at: Kindle, AudioBook and Amazon. Oxford and is a professional writer, editor, and researcher, working in a wide range of subject areas and genres across the humanities and sciences. In 2017, Dania received the Tom Fairley Award for Editorial Excellence, Canada’s highest recognition in that profession. Her 2018 work, “The Book of Lua: Stories and Wisdom from a Little Cat with Mobility Challenges,” was a finalist for two Next Generation Indie Book Awards. To find out more, please visit www.daniasheldon.com

Why would any believer read this book?

Why would any nonbeliever read this book?

Because they may be aware that some questions are not being answered by science and certainly the future is uncertain. This book sheds light on these topics. June 30 – Visiting Ancient Origins
https://www.ancient-origins.net/human-origins/creation-0012102
Daniel Friedmann talks about How the Universe Came to Be: The Bible and Science

July 4 – Live Interview on Beyond Reality Radio Show
Affiliate Stations:1210AM, 1450AM, KVOR,NewsTalk 1010, WBEN 930AM
Listen Live Here!
Jason Hawes & JV Johnson talk to Daniel Friedmann about his book that talks about how the Genesis version of creation & the scientific community’s version of creation can actually be reconciled.

July 6 – Guest Blogger at The New Book Review
https://thenewbookreview.blogspot.com/2019/07/biblical-clock-virtual-book-tour-from.html
Daniel Friedmann talks to other writers about The Biblical Clock

July 7 – Spotlight at The Book Place
https://mybookplace.net/the-biblical-clock-the-untold-secrets-linking-the-universe-and-humanity-with-gods-plan-by-daniel-friedmann/
Daniel Friedmann talks to readers about The Biblical Clock

July 8 – Review at Angie’s Diary
https://angiesdiary.com/reviews/the-biblical-clock/
Daniel Friedmann talks about his writing of the book The Biblical Clock

July 9 -Visiting All Things That Matter
https://philipharris.blogspot.com/2019/07/what-does-bible-say-about-extinct.html
Daniel Friedmann talks about What Does the Bible Say About Extinct Hominins

July 11 – Featured at Susan Heim on Parenting
https://susanheim.blogspot.com/2019/05/spotlight-and-guest-post-biblical-clock.html
Daniel Friedmann talks to families about his book The Biblical Clock

July 17 – Interview at The YP Publishing
http://theyppublishing.com/author-interviewthebiblicalclock/
Daniel Friedmann talks about his books and The Biblical Clock

Topics that will be discussed during the tour –

Did the universe come from nothing.
Can the 6 days of creation reconcile with 13.8 billion years.
Is the universe 13.8 billion years old or 5,779 years old.
What does Bible say about our relationship to Apes.
Is God Necessary to Explain the Universe.
How the Universe came to be Bible and science.
If God Created the Universe, Why Don’t We See Proof of It.
What does the Bible say about extinct hominins.
Can Science Detect the Divine Soul.
What Happens Before The End of Days? Is It Happening Now.
What is the purpose of the universe and man? How does it relate to the end of days.
IS THE END OF DAYS going To Happen no matter what? Do we have role in making them happen.
Is History A random set of events or a guided Process with an End goal.
Are All Historical Events Natural or Can We Have Some Supernatural Ones? How About the Events Relating to the End of the World.
Where Does The End Of Days Fit In the Biblical Chronology.

“Whether the reader enters this discussion from the purely religious side or from the purely scientific/secular side, the one (of many) points that Friedmann and Sheldon make is that there is no reason for combative separatism.Their honesty and humility are most welcome, no matter the preconceived notions of the reader.
Food for thought and for discussion during a period in our history when aspects of the origins debate and the Apocalypse seem to dominate.” Grady Harp, Hall of Fame/Top 100 Reviewer, Amazon

“An eye-opening narrative that guides you on the twisting trail to truth about the sands of time and God’s great hourglass. Impeccably detailed, brilliantly researched.” David Menefee, author 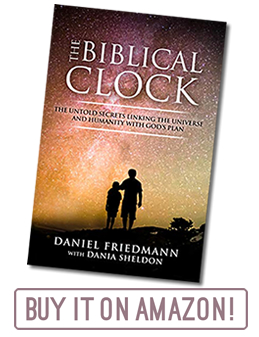 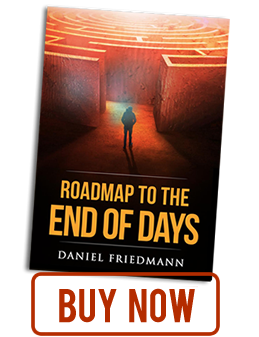